Situated atop Point Henry, the Fort protected the naval dockyard at Point Frederick, the entrance of the Rideau Canal and the town of Kingston, which was the major transshipment point along the supply route between Montreal or Ottawa and all points west.

The British Army garrisoned Fort Henry until 1870 when Queen Victoria's troops were pulled out of Canada. Soon after, "A" Battery, School of Gunnery, followed by "B" Battery, took up residence in the Fort and remained there until 1891.

During World War I, Fort Henry was superficially repaired and used as an internment camp for political prisoners. Following the war, the Fort fell into complete disrepair.

Fort Henry was restored from 1936 to 1938 as a joint Federal / Provincial make work project costing over $1 million. The Fort was opened as a museum and historic site "in the name of all British soldiers who served there" by Prime Minister Mackenzie King in August 1938. During World War II, Fort Henry became Camp 31, a Prisoner of War camp for enemy merchant seamen, soldiers, sailors and airmen. Reopened in 1948, Fort Henry has seen millions of visitors pass through its gates to watch the internationally acclaimed Fort Henry Guard perform.

Years later, Fort Henry continues its role as a museum and historic site to residents of Kingston and visitors from all around the world. Once inside the wooden gates, visitors enter the realm of 19th century military life, experience guided tours, scenic views, heart-pounding musical performances and precision military demonstrations by the Fort Henry Guard* (a highly disciplined group of university student recruits trained as British soldiers from 1867). You will also see people representing the civilian population of the Fort as schoolteachers and soldiers' wives. The Fort also plays host to numerous special ceremonies and events that take place all season long.

*Fort Henry Guard has no connection to either the Royal Military College or to the modern Canadian Armed Forces. 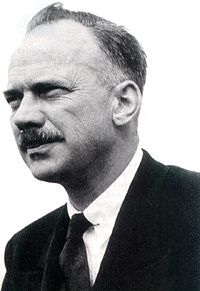 Ronald was born in Kingston in 1908. His father taught engineering at Queen's University. As a child, Ronald read a lot and played in the ruins of Fort Henry. The family moved to Ottawa, but after his father died in 1924, they returned to Kingston, where Ronald enrolled at Kingston Collegiate.

Later, at Queen's, he studied pre­science for a year but fell in love with history and graduated in 1935 with a bachelor of arts in Canadian history. He had intended to continue his education, but when the government decided to restore Fort Henry and required qualified researchers, Ronald was recommended because of his interest in military fortifications. Hired by the Ontario Government in 1936, he was responsible for the actual work and the research and imagination behind it.

In 1938, Queen's awarded him his master of arts, based on his work at the Fort, of which he became director. Between 1936 and 1939, he was extremely busy; he restored not only Fort Henry but also Fort George and Fort Niagara. He loved preserving the authentic feel of these fortifications and was thrilled to find bullets imprinted with teeth marks at Fort Erie, from a time when soldiers were operated on with no anaesthetic. When the restoration began, Fort Henry was little more than a pile of rubble after years of neglect. For two years, a thousand labourers toiled; it officially opened in 1938. A perfect example of fortress architecture reproduced from the original plans, Fort Henry became, and continues to be, a major tourist attraction.

Beryl Wynn Lewis - better known as "Taffy' - got a summer job working at the Fort. She became Ronald's assistant and then his wife and ended up as Executive Director of Fort Henry. The staff loved the Ways, who lived in the apartment inside the Fort, and spent part of each week, as well as summers, at the Upper Canada guesthouse. Weekends were spent at their farm in Prince Edward County, where they raised Holsteins.

Ronald, a quiet man with blue eyes and broad shoulders, was a great storyteller with an encyclopaedic knowledge of Canadian history. An active member of the Kingston Historical Society, he believed Canadian history was far from dry; he refused to allow embellishments of history, such as invented ghosts, at the Fort. One of Canada's first proponents of living museums - a term he lifted from a postcard that a nine-year-old had sent to him in the 1950s - he influenced scores of historians and curators. The best example of the innovative living-museum technique was the Fort Henry Guard, which Ronald considered his greatest contribution. He came up with the idea of having student volunteers, mostly from Queen's, wear mid-nineteenth ­century British uniforms and provide an authentic military presence. Ronald was deeply proud of the Guard, which he called "the best damned outfit on two legs to be found anywhere."

When Fort Henry was transferred to the Ontario St. Lawrence Parks Commission in 1958, so was Ronald, who became Director of Historic Buildings and Sites. In this capacity, he worked on Upper Canada Village, another example of animated history. He felt strongly that history should be accessible to all. In 1961, Ronald received Kingston's Honourable Achievement Award, presented to both him and Taffy, who always worked closely together.

Ronald was promoted to Director of Redevelopment and named as Reconstruction Consultant in the Ontario Department of Tourism. In addition to overseeing Fort Henry and Upper Canada Village, he restored Hamilton's Dundurn Castle, William Lyon Mackenzie's home at Queenstown and Joseph Brant's Burlington home. In 1961, the Prime Minister requested that he be loaned to the Federal Government to restore the town and fortress of Louisbourg, in Cape Breton. It was the largest historical reconstruction ever undertaken in Canada.

In 1965, Ronald resigned as an Ontario civil servant and became a consultant so that he could be more involved in the Louisbourg project. Known far beyond Canada as a prime consultant on historical restorations, he oversaw numerous projects. He was director of Fort Henry until 1970; in 1973, during a special ceremony, he was named an honorary Guardsman. In 1974, he received an honorary degree from Queen's. He died in 1978, just prior to the Fort's fortieth anniversary. An imaginative man committed to making history come alive, Ronald Way once noted, "It is our history, only, that makes Canadians different from Americans, who share the environment of this continent."

Reprint of an article that originally appeared in "Profile Kingston", January 12, 2000.

The colours symbolized the heart of a Regiment. They were originally carried in action to serve as the rallying point in the confusion of battle. The sight of the colours proudly waving above the smoke of the battlefield indicated to all that the regiment still held the line.

The colours of the Fort Henry Guard consist of the Queen’s Colours and Regimental Colours, and are designed in accordance with regulations in effect in 1867. The regimental colours normally bears the battle honours of the regiment.

The Fort Henry Guard Regimental Colours bears the name of the 34 British and 28 Canadian regiments that garrisoned Kingston and Fort Henry during its years of active service from 1812 to 1943.

One of these scrolls bears the honour of the Tyendinaga Mohawks, in commemoration of their service as volunteers for the Crown during the Rebellion of 1837.

At that time, the threat of a rebel attack prompted the commandant of the garrison of Kingston, Sir Richard Bonnycastle, to call out all loyal militia forces in the area. At this critical time, ninety warriors from Tyendinaga volunteered their services to defend the Crown. This strong show of force was instrumental in warding off any potential attack on the city. In commemoration of this traditional demonstration of loyalty, the Fort Henry Guard bears on its Regimental Colours a scroll inscribed “the Mohawks of Tyendinaga.” 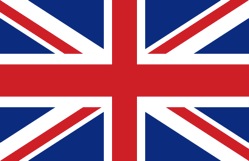 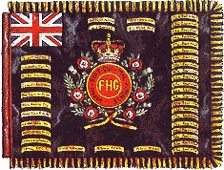